What are fulvic acids?

Fulvic acids are a water soluble compound of humic substances. They form during the biodegradation of plant material, also known as humification. That’s why fulvic acids are present in almost any soil. They function as natural complexing agents, enhance the availability of minerals and inhibit the growth of harmful germs. Peat soils are especially rich in fulvic acids and are thus used as soil conditioners, plant fortifiers and as a fodder additive.

Factually, fulvic acids fulfill a similar function inside the digestive tract of breeding animals as they do in soils: They improve feed conversion and help to reduce diseases of the gastrointestinal tract by inhibiting bacteria, viruses and other pathogens and prevent their take-up inside the digestive system. The germs bound to the fulvic acids and are excreted with them.

While grazing animals take up fulvic acids and other humic substances from the soil, they are utterly missing in the feed recipes for modern factory farming — despite the fact that they have always been a natural component of daily fodder. There’s a reason why they go unheeded by most: To produce pure fulvic acids has yet been very arduous and expensive.

That has changed now. Leading Dutch water supplier Vitens NV has succeeded in extracting ultrapure fulvic acids out of groundwater. Before the water gets pumped up, it flows through different layers of peat, accumulating the containing fulvic acids. As fulvic acids give water a dull coloration, they are normally filtered and disposed. Vitens has developed a patented process that makes it possible for the first time to extract the fulvic acids in an eco-friendly way, using no chemical additives to ensure a food-grade commodity.

Within the frame of an exclusive partnership launched in 2016, German HUMINTECH GmbH turns Vitens‘ fulvic acids into high quality products for livestock breeding, agriculture and horticulture. HUMINTECH is a quality leader on the global market for humic substances based goods, and contributes — just like Vitens — decades of experience in research, development and application to the partnership.

It’s not only Dutch and German farmers that can profit from this collaboration: Due to an international distribution system, HUMINTECH is able to... 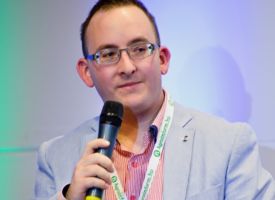 Already as a child I grew up in livestock nutrition next to my active consultant parents. During my university years I gained experience in relations with suppliers and farmers, the daily organization of an agricultural trade company at the Taurina-Kanizsa Forage Production and Serviceing Ltd. Then, I got an opportunity at one of Hungary's market leaders in veterinary, Alpha-Vet Ltd. to raise a department dealing with innovative feed supplements and its market introduction. In addition to the domestic livestock sector, I could gain an international outlook through corporate scholarship in the Netherlands and the United Kingdom, which eventually prompted me to deepen my knowledge in the context of animal nutrition Master's programs. On the end, I could exploit this as an international technical leader in the last years and could learn more about the European and Asian animal nutrition sector. At the moment my goal is to build a succesfull livestock department for the world market leading Humintech GmbH in Humic substance based products. In the future my goal is to further extend my experiences of animal nutrition and international trade. I am motivated by implementing challenges which I can achiewe wide recognition for my team and for myself with.

View all posts of Daniel