A regular feature at VIV events in Asia and Europe since 2005 has been the presentation of awards to leading personalities in the poultry, pig and dairy industries. These awards have featured for the eighth time at VIV Asia 2019, hosted by VIV and Positive Action Publications. During the official Opening Ceremony of VIV Asia 2019 they were presented to the five winners by Mr. Nigel Horrox, Managing Director of Positive Action Publications, and Mr. Ruwan Berculo, Manager of VIV worldwide.

First to be awarded was for International Hatchery Practice – VIV Asian Poultry Breeder Personality 2019. This went to Rafael Monleon, formerly of MSD and now of Aviagen. The citation noted his recent change of sector with his new job and stated that the award related to his previous life in the pharmaceutical sector.

Acccording to the citation: “Here for many years this gentleman was a natural communicator, be it at scientific or industry meetings. He was just as much at home addressing his veterinary peers in an international conference or speaking to a group of farmers on the farm”.

The second winner to be announced at the Opening Ceremony was pig farmer Noplit Sermsaksasitorn from Thailand, named International Pig Topics – VIV Asian Pig Personality 2019. The award was collected on his behalf by his son and fellow pig enthusiast, Agapot Sermsaksasitorn.

Noplit is a former president of the Thai Pig Association. During his leadership, said the citation, he championed the elimination of using beta antagonists in pigs. Furthermore, for more than 30 years as a pig farmer, never once did he use this substance in his own pigs.

It added: “He still fully cooperates with all the projects done by the association. He is very interested in the well-being of the people in Monnang, his local community, helping the... 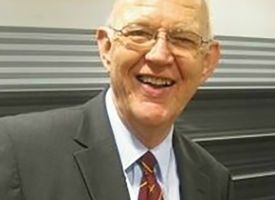 Peter Best celebrated 50 years as an agricultural journalist in 2014. From a farming family with close connections to the animal feed industry, after studying animal science he trained in general journalism before joining a UK company that specialised in arable and livestock magazines. In his subsequent career Peter has been the editor of a number of international titles for businesses in animal agriculture as well as national and regional. Now retired from full-time journalism, he operates the Animal Information Network internationally and lives in southern England.

View all posts of Peter