How to manage your farm with respect to limiting antimicrobial resistance?

Written by Marketing Kepro Kepro
29-07-2019 11:19 - 8 min read 0 comments
In this blog:
Antimicrobial resistance is a very important topic in the field of veterinary (and human) medicine nowadays. In this blog we will explain more about the situation on antimicrobial resistance  and measures against it. We will also explain how you can use antibiotics correctly to inhibit further development of antibiotic resistance.

Current situation of antimicrobial resistance
Farmers and vets report that some current therapies are no longer effective, and in human medicine, people die or need very expensive therapies due to antimicrobial resistance. There are different well known groups of resistant bacteria which are causing harm to humans and animals, like:Scientists calculated, that if we don’t change anything in human and veterinary medicine, human deaths each year due to AMR will be up to 10 million by 2050. On the map in image 1 you can see how many this will be in your part of the world. 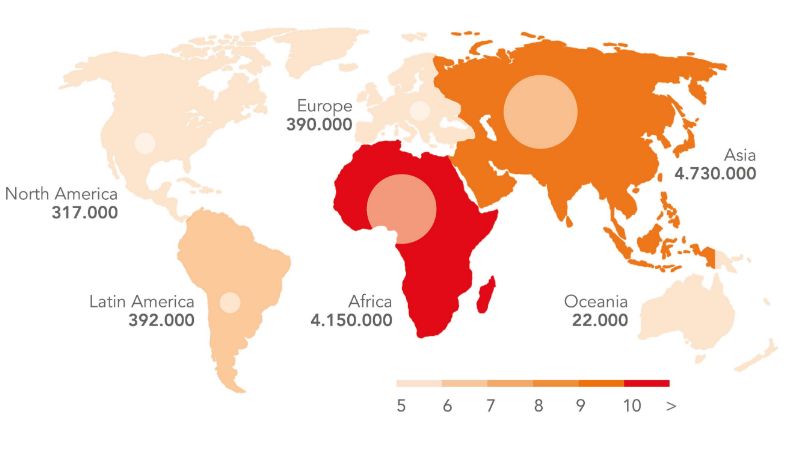 The map shows a big difference between Europe and Africa and Asia. This is caused by the fact that in Europe, strict measures are in place to prevent resistance. The measures are: Other reasons for increased problems with AMR in some countries are:The advice is to only use drugs that are produced in a factory under GMP quality standards and that have been produced in countries where quality control is strict. Kepro fits these requirements.At the moment the WHO (World Health Organisation) is making a plan to fight AMR all over the world. Each member country should make a national action plan to:Background information:
The opinion in the market
In 2012, a Consumer Reports survey found that 86 percent of consumers polled said that meat and poultry raised without antibiotics should be available in their local supermarket; more than 60 percent said they would be willing to pay at least $0.05 cents per pound more for it, and nearly 40 percent said they would pay an extra $1 or more per pound (Meat on drugs, 2012). As the public has become more educated and aware of the antibiotic resistance crisis, they are increasingly voting with their wallets. Sales estimates of meat raised without any antibiotics increased 25 percent from 2009 to 2011 (Perrone, 2012). The increase occurred despite an overall decline in U.S. per capita meat consumption. USDA-certified organic meats—just one part of the market for meat raised without routine use of antibiotics—were the fastest-growing segment of the $31 billion organic foods industry in 2011 (Organic Trade Association, 2012). In 2013, sales of organic meat, poultry, and fish were up 11 percent over the prior year, to $675 million (Organic Trade Association, 2014).
What is causing antibiotic resistance?
Bacteria are always searching for ways to survive. The more often we are trying to kill them with antibiotics, the better they get adapted to the chemicals. At some point the bacteria are developing coping mechanisms to fight the antibiotics. They can do this in four different ways (see image 2): 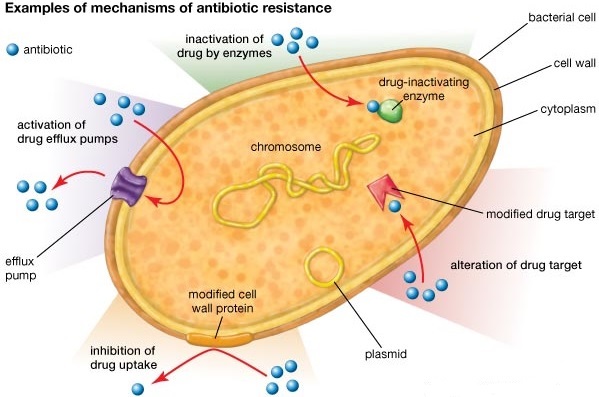 Image 3 - Development of resistance (source: Centers for Disease Control and Prevention.)
Becoming resistant is easier for a bacteria when: 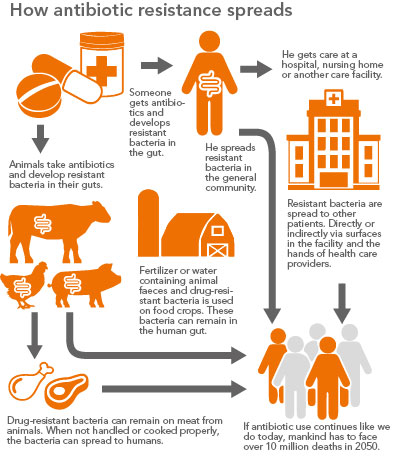 Should we stop using antibiotics?

No, we need them to fight infections. But we need to be careful when using them.  For example, if a broiler farmer gets diarrhoea in his broilers every time in the fourth week of the cycle. He can give the broilers antibiotics every time, but in the end he will have resistant bacteria to that antibiotic on his farm.

It is better if the farmer makes a diagnosis on what’s the cause of the diarrhoea. Is it a bacteria and will antibiotics help? Or may changing the management be enough?...