Early stationary corn sheller were often called "groundhog" threshers because when in operation, they appeared to be digging into the ground and kicking refuse out from behind them. Groundhog threshers were comprised of a rotating toothed or studded cylinder, housed within a box, that beat the grain from the heads as sheaves were fed into it. A variation on this design called for a solid ribbed wheel set upright. As the wheel rotated, sheaves of grain were forced against the wheel and the ribs knocked the grain from the heads.

Until the advent of steam engines (and later gas engine tractors), threshing machines were powered by draft animals hitched to "horse powers" that transferred their motion to the machine. Two types of horse powers were used well into the... 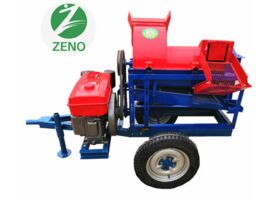 View all posts of Zeno