Among the numerous health problems affecting broilers, parasitic diseases stand out as one of the most frequent and the effects they produce vary from sub-clinical infections to death. Gastrointestinal parasites in broilers produce infections that interfere in the behavior and productive performance of the birds.

When we talk about gastrointestinal parasites in broilers, we refer to those organisms that live inside the different sections of the digestive tract and have the capacity to obtain nutrients at the expense of the host, in this case the bird.

Nematodes are parasitic organisms of microscopic size and round worm shape that settle in the digestive tract of birds and can cause serious problems in the flock. Nematodes are one of the most common parasites that can attack our birds and also weaken the general condition of the bird.

One of the most common intestinal parasites in poultry (Ascaridia galli). The adult forms are 4 to 7.5 centimeters long and have the thickness of a pencil, therefore they can be easily observed with the naked eye.

Heavily infected birds may show droppings, emaciation and diarrhea. The primary damage lies in reduced feed efficiency but deaths have also been observed in the most severe cases.

They are small, slender, filiform parasites that can measure up to 18 millimeters in length. There are several species of Capillaria living in birds. Capillaria annulata and Capillaria contorta occur in the crop and esophagus. There they can cause thickening and inflammation of the mucous membranes and occasionally severe lesions.
The life cycle of this parasite is direct. Adult worms can enter the intestinal mucosa to lay eggs, which hatch with the feces. After the embryonic phase, which takes 6 to 8 days, the eggs are infective to any bird that consumes them.

The most severe damage occurs 2 weeks after infection. The parasites usually produce severe inflammation and sometimes hemorrhage. Erosion of the intestinal mucosa can be extensive, resulting in death.
These parasites can be a problem in houses that use very deep litter. Severe infections can cause reduced growth in chicks.

This parasite (Heterakis gallinae) is found in the cecum of chickens, turkeys and other birds. They are small, white worms that can measure up to 15 millimeters long.

Apparently, this parasite does not seriously affect the bird's health. At least no pathologies or marked symptoms can be attributed to its presence. Its importance lies in the fact that it has been blamed for being a vector of Histomonas meleagridis, the agent that causes histomoniasis. This protozoan is apparently carried in the eggs of the cecal worm and is transmitted from one bird to another through these eggs.

The life cycle of the parasite is similar to that of the common roundworm. Eggs are produced in the bird's cecum and hatch with the feces. They reach their infective form within two weeks, which may be longer if the weather is cold. The eggs are very resistant to environmental conditions and will remain viable for long periods.

These are flat, ribbon-shaped and almost always segmented worms, which have a high percentage of infestation in broilers, and are very common in warm weather.

In most cases, it is rare to find them in confined birds. They can vary in size from very small to several centimeters long. The head, or anterior end, is much smaller than the rest of the body and they are also known as tapeworms.

There are more than ten species of tapeworms, although only seven are those that affect broilers. These parasites attach themselves to the intestinal mucosa by means of suction cups on their heads.

They need an intermediate host to finish the cycle, these can vary between: insects, crustaceans, earthworms, slugs, snails and leeches.

The pathology or damage that tapeworms produce in domestic birds is controversial. In young birds, heavy infection results in reduced efficiency and reduced growth, and young birds are more severely affected than adults.

Other signs of the disease that can be observed are: emaciation, dull plumage, slowness of movement, dyspnea, leg weakness and in some cases death.

It is a parasitic disease caused by a group of protozoa of the genus Eimeria. Clinically it is characterized by bloody diarrhea and anemia and in the subclinical form by a... 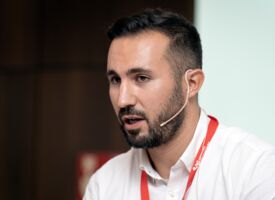 As responsible for the export area, we seek to build trusting relationships with all our customers, with the aim of developing win-win relationships in which we can support the commercial development of all our distributors and customers. We are committed to offering the best possible service, which accompanies and complements the high quality of our products, always aiming to strengthen the profitability of farms through the improvement of animal health.

View all posts of Joaquín