CAS anesthetization: the way of the future

Atmosphere stunning is conquering the world

Globally, the interest in controlled atmosphere stunning (CAS) systems for poultry is growing, driven by multiple factors. Governmental legislation and consumer preferences concerning animal welfare are key considerations. Product quality, however, is also a main driver for choosing CAS. Marel Poultry was the first company to produce such an anesthetization system. At the moment, the popularity of the current generation Stork CAS SmoothFlow system is rocketing worldwide.

Since 1st January 2013 the new EU legislation 1099/2009 has been in place. The legislation protects animals at the time of killing and describes in detail what and how systems must be used for stunning and killing animals. For water bath stunning systems minimum currents (mAmp) per bird are determined to ensure loss of consciousness in all birds. These required currents, however, cause quality loss of the meat. This is one of the reasons why the majority of European processors have already switched to a two phase CAS system.

In other parts of the world, legislation is slowly becoming stricter. In some countries this will result in a faster introduction of CAS stunning. We see this happening in the US, where  the “Joint Animal Protection Organization Statement on Broiler Chicken Welfare Issues”, a group including the US Humane Society and Compassion in World Farming, asks poultry companies to use CAS by 2024. The same year is marked as a deadline by the Global Animal Partnership organization for the broiler industry to have taken measures which significantly improve animal welfare. Already two of the major US poultry processors recently decided to implement the Stork CAS SmoothFlow system in all of their broiler processing plants.

The world’s first Controlled Atmosphere Stunning (CAS) system for poultry was produced by Marel Poultry. “Based on intensive research in the early 1990s, we launched the first generation CAS stunning system in 1996. CAS SmoothFlow, our latest generation system, is the result of 30 years of research as well as customer and market experience,” says Tim van Schaik, product specialist live bird handling at Marel Poultry.

“We have co-operated with numerous research institutes worldwide such as the Roslin Institute of the University of Edinburgh,” says Van Schaik. “The technology we apply is supported by dozens of scientific publications.” The Stork CAS SmoothFlow system has a unique feature in the world of anesthetization; the regulated addition of O2, next to CO2. Van Schaik: “Based on the findings of scientific research, we use CO2 and O2 together to form an optimum mixture for the broilers to get smoothly induced into unconsciousness.” The SmoothFlow system can consist of up to five equal sections, each with its own programmable controlled atmosphere. In the induction phase the broilers lapse gently into unconsciousness. Perfect control over the air mixtures in subsequent sections ensures a smooth transfer to the completing phase.

The Livestock Research  department of Wageningen University (a division of Animal Welfare)  has conducted an elaborate research of the two phase... 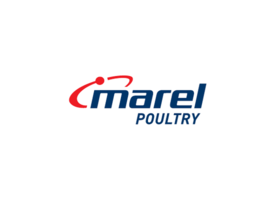